They added the Huorns back to Helm's Deep!
And added scenes with Merry and Pippin in Fangorn! (Loved the Entdraught scene. And Treebeard reciting poetry and pining for the Entwives.) And had them find the pipeweed stash in Isengard after the flood!
*cheer*

And they added a flashback that explains why Faramir was so anxious to prove himself to his father, which was a nice touch. And added a scene with the Elvish rope, and a scene explaining that Sauron fears Isildur's heir, and extended the scene in Osgiliath after Faramir lets Frodo and Sam go, and and and and...

And the final count of the orc-killing of Legolas and Gimli. "He's twitching because I have my axe embedded in his nervous system!" Bwahahaha. XD

So yeah. Loved the extended edition of The Two Towers.

Now the only thing making me grumpy is I have to wait another two months for the release of The Return of the King. (Look at the release dates.) *grumble*

But apart from that, I'm happy. Can't wait to dig in the extras, commentary tracks, etc.

[EDIT] This site has a pretty thorough list of the scenes that were added.

...five teeth, a couple fingernails, half a liver, and one kidney. 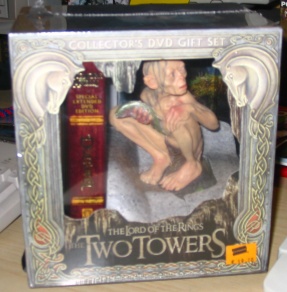 Self, if you learned to sew without stabbing yourself in the finger every three stitches, that would be good.

I'm reading "The Da Vinci Code"... very good book, overall, interesting and well-written.
At a certain point of the book, though, the characters wonder about the meaning of an inscription that "doesn't seem to be written in any known language". The book provides an image of the inscription.
And I dunno whether this says something about me, or about the characters, but I pretty much immediately exclaimed, out loud, "sheesh, it's written backwards, you dimwits, find a mirror".
Ah well. At least it didn't take them more than a page and a half for them to figure it out...

*wipes tears of laughter from eyes*

It was a quiet evening in the staff channel for our IRC network. And then somebody (who shall remain nameless ;) posted a link to the network website as viewed through the Pornolizer. And we all died laughing for the next hour or so. XD

Still I can find happiness in a server notice. It's a silly thing... but it makes me smile.

There's a place I still miss. I was happy there, for some time, and I miss it now.
What made me happy there I have elsewhere, and free from the things that made me unhappy there. And still, I miss it.
I know I shouldn't. Easily used, easily discarded, easily forgotten, easily replaced, I was little more than a puppet, and so were others I care about.
And I know I should stop picking at the scab, and let it heal. Stop looking, stop being morbidly curious about what happens on the other side, stop counting days and stop wishing I could speak with somebody rather than just be discarded like this. Take all it's taught me and use it to create something of worth. Stop hurting myself with the memories, and just be happy.
Still...

There's a certain smell in the air...

[23:20:17] -StarChat- [GLOBAL NOTICE] can some ops come into starchat if they have some time please. (Please do not reply.)
[23:22:39] -SaD- Global Notice Everyone can ignore that request for joining #StarChat.. false invite.. human error :P [Please do not respond]

I can only say... and this without a trace of bitterness... that's what comes from firing 90% of the good opers, then hiring clueless people and giving them an oline and then a SO without even teaching them what commands they should use, and the difference between a /globops and a global broadcast.

Back from Lucca Comics... to avoid a lot of questions with the same answer, here's what I got:

- "The art of Spirited Away" artbook. Yum. I can so see myself making layouts with some of these images...
- "Your eyes only" Chobits artbook. Ditto. I also saw the limited edition version, the one with the carry bag, but I didn't feel like blowing €50 on an artbook + a carry bag when the plain version cost €17 - €33 for a carry bag, nope I don't think so :P
- Two "Nana" manga volumes, #6 and #8
- The Spirited Away soundtrack
- A mini Living Dead Doll. It's very cute, in its creepy way. *grin* I wanted one of the larger ones... this for instance... but they cost too much, €40 is more than I can justify spending on a doll, fun though it would've been.
- A keyring with the One Piece skull
- Some assorted manga to read on the train trip back home.

[EDIT] One thing I missed though, was an Atashi plushie (you know, the bunny thing from Chobits), the pink one with its eyes open. The place was so crowded and I didn't feel like pushing through another crowd to ask how much it cost... starting to regret it now, though. Bleh. ;_; [/EDIT]

Trip was relatively pleasant... one of the trains ran late though, so we (me and my brother) had to run to catch the next one and we spent the whole time on that train standing, it was so full. And on the trip back home, we ended up sitting next to Grouchy Lady and her SO... we were just sitting there reading comics and minding our own business, and they radiated disapproval. Could damn well near hear their thoughts of "what the hell are they doing, comics and artbooks, how stupid". Ah well... dumb people. Overall I had fun, even though it was raining by the bucketfuls, so it was cold and wet.

Now to finish catching up on stuff... then NaNoWriMo. Nice way to start, being one day late... *runs off*