Because I 1. needed to burn off some negative energy doing something productive, 2. needed to do this anyway since I've put it off long enough, kicie.net has a new layout.

Now to find enough will to work to start on that anime-related site I've been saying I should do for a while...

OK here's what you do:

This is an enlightened arrangement by the Management because it prevents unemployment among young unmarried women and probably also keeps up the birthrate.

Yes, for lack of a better post title, I went with the completely unimaginative one. ;)

I just (ok, it was a couple hours ago, shush) came home from Laura Pausini's concert. (I'd bought tickets for this almost three months ago, they were one of my Christmas presents.)
Not the first time I go to a concert of hers, either - the first time was in 2002, at the same location - and like last time, this time kicked ass, too.

Highlights of the evening:

- We had reserved seats, right next to the stage. This was a Good Thing for two reasons... one, being right next to the stage was great in terms of seeing Laura Pausini up close (we were less than three meters from her at times), two, when we got there the place was already packed, and we got there rather early. If we hadn't reserved seats, we would've had to stand for the whole concert, and while I could've dealt with that, I doubt my parents or my brother would've been pleased.
- She opened with "Gente", one of her older songs and one which I still love. And above all, it was a song I needed to hear this evening. That she opened with it, well, I'm not going to explain the reasons (yet) but it was like the universe wanted to give me a big kick in the ass. It got me and made me cry, too, but it was a good thing.
- She interacted a lot with the crowd. Some singers just get onstage, sing, and go away, but she spoke with the crowd, she told stories, she encouraged the crowd to sing along, even letting us sing some bits of the songs ourselves, she joked around ("I see you're singing one of my songs... well I hope you're singing one of my songs, if you're singing Giorgia [another well-known and popular Italian singer] I'll have to come there and kill you")... at one point during a song, she crouched, poked a security guy, and had him get a little girl (she couldn't have been more than 5 or 6) that was in the first row of people standing in front of the stage. And brought her up on the stage and crouched down to her level and had her sing the ending to the song. And was generally nice to her ("I've been looking at her and seeing she knows all the words to my songs, I have three screens in front of me to tell me the words but it's easier to just look at her, she knows them all"). That rocked so much.

And! I managed to get a decent photo. (All the others were either blurry or too dark - but to my defense, it's not particularly easy to take a good photo when you're bouncing and singing at the top of your lungs, and the subject of your photo is singing and moving around too.)

(If you were wondering, osiris is a complete nutter. Oh, and I was almost forgetting to mention, he's the Windows test manager for Opera. ;))

Sometimes the tiniest things can make me laugh. *grin*

At least this course's interesting...

Ball revamped: metaphysic. One hell of an evil game. Fun though, in a warped and a bit masochistic way. :P

Things you learn while travelling

- People who design train seats must be midgets. (How else would you explain the nonexistent leg room?)
- The distance of your train car from the beginning of the train is directly proportional to your level of tiredness. (12... [expletive]... cars. If I'd had to walk another one I would've collapsed. Had to walk it back when I got off the [expletive] train, too, which resulted in my brother worrying I'd missed my stop, since he didn't see me get off the train (of course he didn't - I was WAY out of his sight when I got off). Eesh.)
- Subway stations will be stuffed full of people... right until the point where you can't find where to go (thank you, cryptic signs), at which time everybody will vanish and crowd around the ticket booths. Ticket-sellers will be too grumpy or busy to answer your query, and the only person left will be exactly as lost as you.
- 7 hours in which I have nothing else to do but read (well, that or stare into nothingness, which wasn't particularly attractive) = 4 1/2 books. Bookworm? Me? Nah.
- The closer you are to your destination, the less of a clue the people you're asking for directions are likely to have.
- If you go back to a city for the first time in years (five at least if not more, I've lost count), and there's a monument (let's say it's a church) you loved and want to see again and this time take photos of, it'll be wrapped up in scaffolding and looking like a giant icky grey thing, not the delicate, pretty church you remember. (*grumble*)

London Underground: the song. I'm doubtlessly late on posting this, but what the hell... it amused me, so I'm posting it. (Warning: NSFW due to rather bad language.)

Of books and supermarkets

The supermarket in the mall now carries a selection of books in English. Very limited, obviously (plenty of Dan Brown stuff, several copies of both Bridget Jones books, and a few copies of The Hobbit), but still.

It's just... exceedingly odd, in many ways. This is the supermarket that's full of trashy romance novels and where you can't find anything that's even just slightly odd.

And they carry books in English.

Granted, they're not particularly good books, excluding The Hobbit (though, I admit, I'm guilty of having bought The Da Vinci Code yesterday when I saw it was there - I was tempted to buy The Hobbit as well, but the copy of it I already have is not at the falling apart because of being read too much point yet, so I can't justify it to myself)... but it's still a step forward.

Maybe we'll soon see a proper bookstore doing this as well? *crosses fingers* There's a wonderful bookstore carrying all sorts of books in English near here, but it's in another city I don't often have an excuse to visit. (But I'm going there on Monday. Yay!)

I really hope so. Anything that helps feed my reading addiction is a good thing. ;)

(Note: if you use a non-IE browser, you'll have to switch to IE, some images are only guessable using IE. Also, be prepared to open your image editor of choice - you won't manage otherwise.)

I finished it \o/ (But, to be fair, an IRC friend and I had a go at it together - where I got stuck, he helped me out, and vice versa. I see no point in breaking my brain when working on it together can achieve better results with less brain pain. ;))

I just stumbled upon OrganicHTML, a site which turns (don't ask me how) URLs you give it into a plant growth thing.

Here's the plant this blog generates: 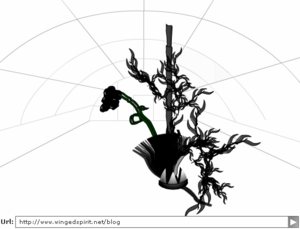 Almost monochromatic, except for green and blue on the left growth (somewhat difficult to see, since they're very dark). Still, I like it.

I wonder how the plant is generated...

I'm pretty jaded, I have to say. I firmly believe the vast majority of humans suck - because they're not decent people, because they're selfish, because they don't support others, because what should be the status quo - normal behavior - isn't.

And then sometimes, something turns up that makes me think things aren't so bad after all. Such as now.

Poking around the discussion about that link, some people are saying "What's so special about that? Everybody does this, it's what's expected of them".

For those who knew what was going on this week: my mother is back home and is well. Thank you so much for the hugs and support. :)

And in other news

Just installed the newest stable version of Opera - 7.54u2... it's a security release, nothing more, but yay, they fixed the issue with must-revalidate causing pages to reload where they shouldn't! (Which was the fault of the servers sending the directive when not needed, in the first place, but yay, fixedness!)

I ♥ Opera and the folks at Opera. Good browser and good fun to chat with, respectively.

However am I supposed to ever manage to give them all away? It was bad enough when it had 6 I couldn't manage to give away (after I gave out about two dozen to friends and family), but 50? Sheesh.

Soooo... anybody still Gmail-less and wanting a Gmail account reading this, by any chance?

Especially one who does not wish to be seen...

Woohoo. Finished Thief 3. Loved the ending. Eventually going to replay the whole game in Expert, but not immediately.

[Mrs. Spoiler]'s lair was cool, if a bit diminutive. The museum afterwards kicked ass... thief-proof indeed. *snerk* There wasn't a guard awake after I was done with it, nor a single bit of loot for that matter. The final mission... meh. A bit of a letdown. Yet Another City Run, really... easy even with the added challenges.

And the last handful of cutscenes looked a bit... rushed. :/

have to say, I felt a bit sorry for [Mrs. Spoiler] in the end. Her own damn fault, granted, and she tried to kill me several times, but... eh. I'm too soft-hearted for my own good sometimes. ^^;

Also, seeing the plot of all three games coming full circle at the end of the final cutscene was great.