All I want for Christmas...

Since I know those people read my blog, I figured I'd make a list of stuff I want for Christmas, in order to avoid "well, I didn't really know what to get you..." and similar things occurring. The list ranges from cheap to expensive, touching pretty much everything in between, so there should be something for all pockets here ;)

Continue reading "All I want for Christmas..."

I'm aware I've not posted for quite some time. I've just had nothing to talk about, really. Just... normal life. Boring life. Looking for a job, and all that crap. Oh, and the cat.

Testardo. "Stubborn". He was a stray we didn't want to adopt, since we already had one cat - but we made the big mistake of giving him food, and after that, he stubbornly refused to leave, no matter what we did to chase him away. So he stayed, and was named Testardo almost immediately, after that one facet of his character that was immediately obvious to everybody.

He was one of those cats who are always around, always underfoot, always jumping in your lap or clinging to your leg and begging for cuddles. When we ate, he was always near the table, meowing and trying to jump into our laps and begging for food off our plates. (Even if his bowl was full.) If one of us got up from our chair, he'd immediately jump on it and sit there, looking all innocent... it seemed like he was saying, "what? this is my chair. really".

He loved to cuddle, loved to eat and loved to sleep. He always had a bit of a weight problem - when we first saw him, for a bit, we even thought he was a pregnant female, he was so big.

I can't remember when we got him... I'm not too good at keeping track of years... and after a bit, the line blurred - he wasn't "the new cat", he was our cat. I do know that he stayed with us, that he lived, for about 10 years.

When I came back from Edinburgh, back in September, I found him much, much thinner than he'd been when I'd left. He'd been sick, I was told, he'd had an infected wound on his face. He was still his normal, cuddly, food-loving and sleep-loving self, though - so I didn't really worry too much.

But he kept getting thinner and thinner, and colder and colder.

Eventually managed to convince my parents to get him to a vet... the vet ran some tests, found him dehydrated and with serious kidney problems. Anything the vet suggested was dismissed by a certain family member of mine as being "too expensive" and "not worth it, the cat's old, he's a goner anyway". And I couldn't do anything myself, being completely broke.

So Testardo kept getting thinner and thinner, and stopped eating and drinking altogether. The only course of action offered by that certain family member was force-feeding him... which of course didn't work.

Yesterday, he crawled home and then downstairs, to be with us... he didn't have the strength to move after that, he just lied on the floor and stayed there.

Last night he slept inside, in a box in the laundry room... the door of the room was closed, I guess as a precaution to avoid him getting out... even though he didn't have the strength to move anymore.

I could still hear him crying through the closed door. I went to look, petted him a bit... he just cried.

I'm glad that he's stopped suffering, finally... and I'm grateful that I had him for so long... 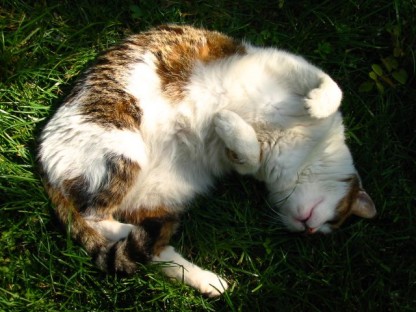 He was gorgeous, wasn't he?